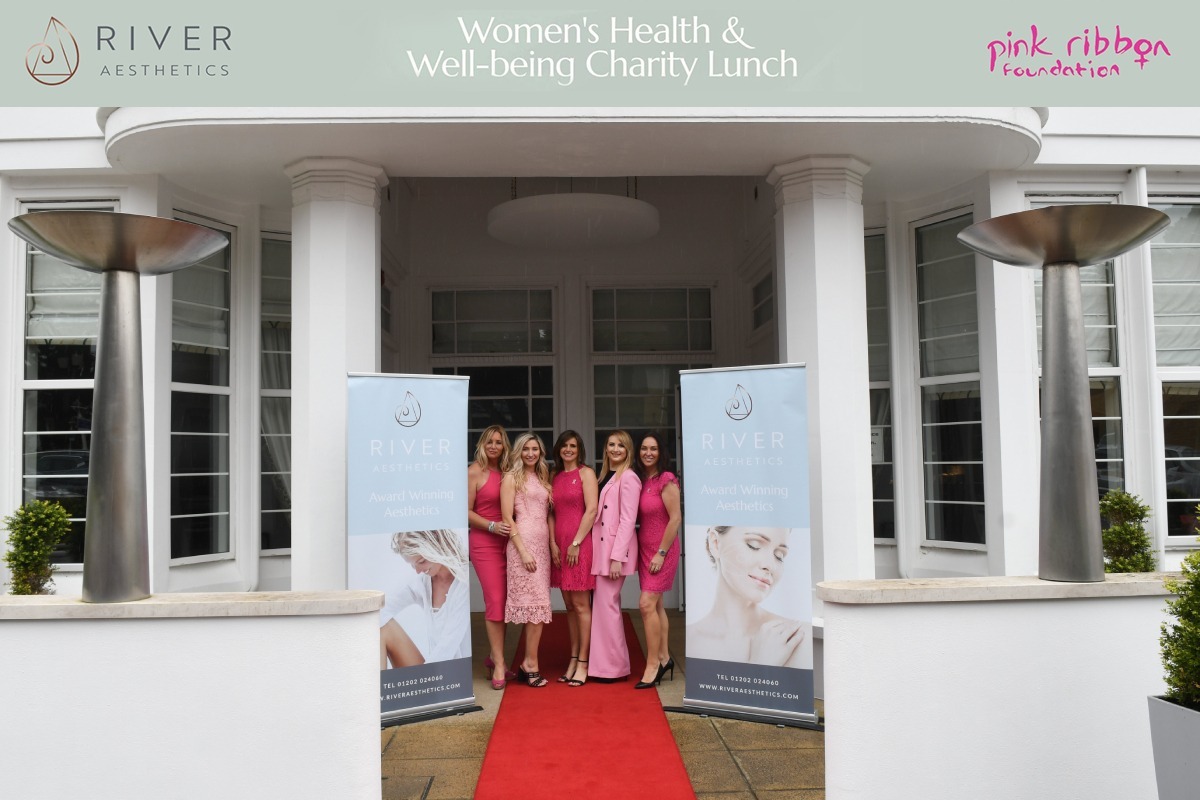 A staggering £10,784.32 was raised at River Aesthetics’ fund raiser to support the work of the Pink Ribbon Foundation which corrals funds for smaller breast cancer charities.

Over a lunchtime on Wednesday 1st May 80 amazing, and generous, women joined the River Aesthetics’ team at the Haven Hotel in Sandbanks, Dorset, to raise a figure which will have a significant effect on some of the UK’s smaller breast cancer charities.  The guests were inspired by talks by TV celebrity Anthea Turner, one of the The Pink Ribbon Foundation’s patrons, and the energetic and passionate Lisa Allen, the charity’s head of fundraising to delve deeply emotionally and literally.  They were joined by Kirsty Ettrick, whose poignant story about the motivation for the launch of London Medical Concierge after the premature death of her husband, stimulated the fund raising efforts still further.

The Pink Ribbon Foundation is a grant making trust with a mission to fund projects and provide financial support to UK charities which relieve the needs of people who are suffering from, have been affected by breast cancer, or who work to advance the understanding of breast cancer and its early detection and treatment.

There are a considerable number of breast cancer charities in the UK, each as deserving as the next.  However, many of the charities supported by the Foundation supported are the smaller ones, which operate on a shoestring.  Every year the Foundation invites charities in the UK to apply for a grant in order to help them continue their vital work or to fund one off projects.  The Pink Ribbon Foundation has very little infrastructure and relies on the hard work of trustees, patrons and supporters to maximise the amount which goes to the charities which benefit from the funds raised.

Thanks to the generosity of 20 companies, a range of highly desirable prizes were auctioned or raffled to raise the impressive charitable funds.  The Pink Ribbon Foundation also sold bejewelled Pink Ribbon badges, and guests queued (and paid) to have their photos taken with Anthea Turner.  Even the flowered table decorations, which had been donated to the event, were sold off at the end of the event!  The final amount raised was matched by Barclays Bank, bringing the total to the impressive £16,674.85.

However, River Aesthetics’ support for the charity does not end there.  The team feel that their ethos has tremendous synergies with the aims of the Pink Ribbon Foundation to support women (and men) take care of their health and wellness.  So for every River Gold Facial performed at its flagship practice in Canford Cliffs a donation of 10% the price will be donated to the charity.

As female doctors and an all-women team with a strong interest in women’s health River Aesthetics feels this partnership fits with its philosophy.  Feedback from attendees of the event was that this was a great affiliation, so River Aesthetics is also going to create a River Charity Committee to take its philanthropy to another level and ensure it gives something back to the community.

From a personal level too this charity is so important with both Drs Charlotte Woodward and Victoria Manning as both their mothers have experienced breast cancer.

Much credit is due to the pink clad team from River Aesthetics, corralled by Operations Manager Lisa McKinnon, whose phenomenal hard work and attention to detail led to the success of the event.


Join our VIP club for the latest news and offers